At the close of the 2011 field season, Dr. Jessica Thompson of the University of Queensland (Brisbane, Australia) agreed with the Department of Antiquities represented by myself, Harrison Simfukwe, and Malani Chimula, to continue excavation of archaeological sediments in the Chaminade area during the off season. The work proposed excavation of a 2 x 50 m trench up to a maximum depth of 2 m below present surface. Though we only managed to excavate only 2 x 25 m trench due to limited resources. The present surface was defined by the base of the existing trench, which was prepared by removal of up to 2 m of overburden sediments with a mechanical excavator. As part of the scope of this work, all overburden was passed through a 5 mm mesh sieve.

All archaeological materials recovered during excavation were plotted, bagged and allocated sample numbers in accordance with protocols developed by MEMSAP. All sediments was dry sieved onsite through a 5 mm mesh sieves and all artefactual residues retained and bagged with complete and appropriate labels (Site, Date, Excavation Area, Square, and Context). In addition, a total of 4 squares were wet-sieved. These squares felled every 10 m along the 50 x 2 m grid and were wet-sieved through 5 mm mesh (e.g. Squares A10, B10, A20, and B20). Lab work included sorting and labeling of artefacts or potential artefacts from wet-sieved residue following procedures developed by MEMSAP.  Data recovery by MEMSAP relied heavily on technological solutions, including the use of a total station, handheld computers, and barcode scanners. Excavation proceeded according to the stratigraphic units of the sediments.

Figure 6 (below): Excavation proceeds at a Chaminade-area Middle Stone Age site during the off-season. 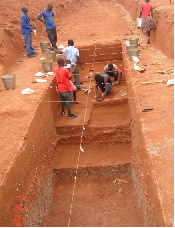 Like many archaeological projects, MEMSAP excavations took place within a horizontal grid system of 1×1-m squares, with two rows of 25 m length each defined as A and B, and a type of stratigraphic division which we call a Context that reflects an observable anthropogenic, biogenic, or geogenic unit. Thus, all excavated materials, including Plotted Finds, were provenienced minimally by Square-Context, for example Square A4-Context 3 (A4-3). To each set from this provenience, a single identification number was assigned, called the “Lot Number,” which served like a tracking number for a package and database. A set of barcode labels were generated in advance for these Lot Numbers for use on bucket tags and excavation forms (i.e. Context forms, Sample forms, Lot forms and Photo series forms, refer to attached appendices 4-7).

When recording samples, the excavator gets a barcode sample sticker from a trench leader who records the Lot number on the sample Sticker and placed the sticker in a small plastic bag. The sample number was also recorded on the context form and sample form. Then the Sample Sticker was placed in the bag that contained the bulk sample. Thereafter the bulk sample was taken from the designated area. Usually this was the centre of the context one was excavating. Then location of the bulk sample was mapped using the Total Station.

Opening Elevations measurements were recorded on the context form using a Total station. An “x” was indicated on the approximate location of each elevation shot on the Plan Sketch at the back of the form. An Opening Outline on the plan was then mapped on the Context Form.

Processing and Analysis of recovered materials

Detailed processing and analysis was done during and at the end of a field season. This involved sieving, screen washing, sorting screened material, identifying and labeling artefacts, generating basic artifact and sample inventories and data entry into the Access Database. A relational Access database was used to accomplish this which was anchored by three key tables that share two fields—the Plotted Find number and a Lot Number—that define the relations among the tables. Plotted Find numbers were sequential, and so every find or sample received a unique one.